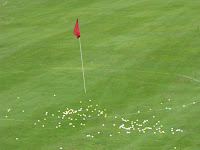 To my horror an association we manage announced plans to add a golf ball drop – from a helicopter – into their golf tournament fundraising activities. I figured it was loaded with peril and would both begin and end with liability issues. But, it was successful. Here’s how it works:

1. Old golf balls are donated (preferably) or purchased. In this event, all the golf balls were donated from various golfer 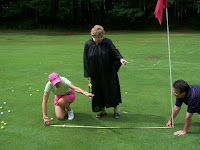 “shag bags” and then retained by the golf course;
2. A pilot donates use of a helicopter and flying services for the event;
3. Each golf ball has a number written in permanent magic marker on it;
4. Golf balls are sold one for one amount, or three for another amount;
5. The drop occurs after all players complete the course and turn in their score cards. A helicopter looms overhead and a person releases the golf balls from the air, using a burlap bag, onto an area of the course;
6. The drop area is not on a green, but rather in the upper portion of the 18th fairway. A flag stick is centered in a 15 ft diameter chalk circle. Spectators watch from a safe distance on the approach apron to the 18th green.
7. Whatever ball is closest to the flag stick wins a prize. Members are assigned as “judges” to determine which ball is closest.

Before okaying the activity, we checked with the insurance company of the association and found that no rider was needed for the event, and that it would be covered. We also confirmed with the golf course that they had coverage in the event there was damage to their building or to cars in the parking area should golf balls go awry. The pilot was asked to provide proof of insurance and indemnification for use of the helicopter during the event.

This was not the first time a golf ball drop had been used as a fundraising event at this particular golf course, including that particular pilot and helicopter, so they had little concern about it. They had a plan for how to clear the golf course of the dropped golf balls in a short period of time. In addition, the pilot had done this for other groups so he was experienced with the details.

1. It was popular as it was unique;
2. They did not set a limit on golf balls that would be sold, and found they under-priced it, which resulted in both needing to aquire additional golf balls to drop and needing to do two trips because the helicopter couldn't accommodate so many with one trip;
3. There was a threat of weather conditions that would not have stopped golf play but could have stopped the helicopter. It’s important to note on the fundraising materials the alternative way a winner would be selected if the helicopter could not fly or weather conditions didn’t permit the helicopter to go out;
4. The volunteers added fun to the event – including the judges wearing choir robes to look like judges;
5. It got media attention, where many fundraising activities do not. They sought out the media.

Here's a YouTube video of this type event when conducted for an area hospital (i.e., this was not our event but will show you the details.)
Posted by Cindy Butts at 10:24 PM