The DC office of our national association recently held a staff competition for gingerbread house design. This is actually a fun idea that could be scaled to even a small office with a few employees, multiple associations in different states, or even a member competition.

Here's how it works:

1. They purchased pre-built gingerbread houses at a local grocery store ($15 each) - which standardized the main structure; and provided "basics" such as gum drops, little candy canes, frosting, sprinkles. Could buy more materials or add on to the structure, but core had to be the gingerbread house.

2. Time period to complete was 4 days;

3. No theme - but all did use a real estate or association focus anyway;

4. Everyone on staff could vote (they used paper ballots and one ballot box);

5. Prize was a pizza party for the winning division - but since everyone in DC is naturally over-competitive by nature winning was most important;

A video holiday greeting card was created which encompassed all the gingerbread houses and sent to all staff.

2. I would likely to do two awards/prizes if not all in the same building/same organization - one with judges; and another that was a popularity contest (where getting votes was really encouraged). Popularity votes could be online or even cash donations counting as votes that could go to a charitable cause.

3. Depending on sizes of divisions, it's possible in both the design and voting that the largest could get some degree of an edge - although a single artistic person could always wow everyone even if no one else assisted;

4. I believe a theme would make it easier to judge - and would include that;

5. For competitions that aren't all in the same building - I believe it would be possible to have multiple people in various towns/states order the same house online; and (not to be a Debbie Downer but to recognize various resources to participate) it might also make sense to have a limit on how much can be spent on supplies - or limit it to certain supplies that can be used.

I thought the creation of a holiday video card that captured all of the houses and spirit at the end was a real bonus and way to keep the recognition of the effort. Here's a runner-up gingerbread house: 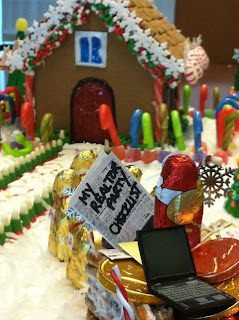 Special thanks to Megan Booth and Claire McDonough for the pictures and details
Posted by Cindy Butts at 9:33 AM